Around 1.5 months ago, I have started learning iOS development using SwiftUI. I am building a small app to keep track of my finances. As part of my learning, I decided to set up a workflow to run Xcode tests using GitHub Actions. And today, I want to share my experience of doing it.

One small step at a time they say. Let’s start with running our tests on a local machine. I assume you have already created an Xcode project. In addition, this article is not about writing unit or UI tests. If you want some references, please, check this article. But, by default, your project has some empty tests, so you are good to go.

We will use xcodebuild tool to run tests. Go to your Xcode project directory and run in terminal the following command:

My Xcode version is 13.0 so it supports iOS 15.0. If the above command failed, please, check the error message. There is a chance you have a different Xcode version installed. The error message will indicate available iOS versions on your machine. You will need to modify the OS parameter in the destination field accordingly.

The command will launch both UI and unit tests. If things went well, you should get a similar output.

Good job! Let’s move to the next step.

We know how to run tests locally, it is time to move to GitHub. I don’t want to repeat GitHub documentation, so if you never used Actions, please, check Quickstart and Understanding GitHub Actions articles from the official page. Those are pretty good.

Continuing our journey, here is a simple example of a workflow.

A list of supported Xcode and iOS versions for macos-11 runner is available here. You can find similar lists for other macos runners here.

In the end, we run the same command to run tests as in the previous step but with one addition. We are using xcpretty to format xcodebuild results for better readability.

You can use Action’s matrix feature to run a job with multiple parameters. The workflow below will run two jobs: one with iOS version 15.2 and second with version 15.0. As before, we also need to specify appropriate Xcode version.

I added a parameter called name to the job to make it appear better. Results:

You can also use matrix feature to test different device configurations, etc.

When developing my app, I didn’t want to have UI tests at the beginning. I expect the interface to change a lot. Even without having to write new UI tests, there are still some empty tests that take time to initialize. This is important because GitHub Free plan allows only for 2000 minutes per month. And 1 minute of macOS runner is 10 minutes of a regular runner (details). I would like to save some free minutes I have

Considering all the above, I decided to disable UI tests. How to do it?

You will need to disable them in your project’s schema. Go to Xcode, then Product > Scheme > Edit Scheme, uncheck “Enabled” field near the “MyProjectNameUITests”. 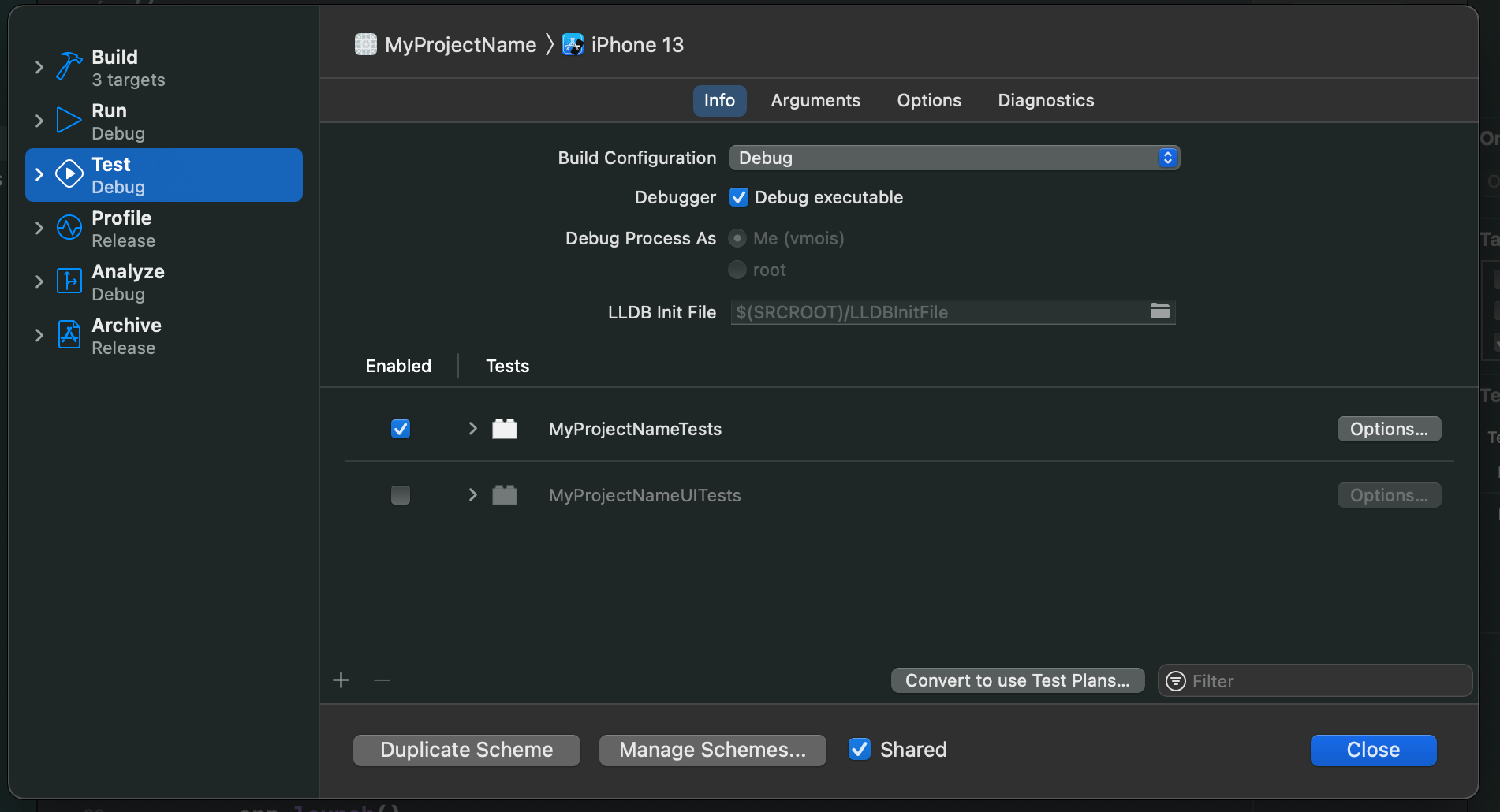 Congratulations! I hope you have your GitHub Action workflow up and running. This is a sufficient setup for the beginning, but you might want to go further with your CI. For example, adding a linter check for Swift, or writing some UI tests. Thank you for reading this article! See you.